Fresh from squatting in a hide, where I scoffed last night’s pizza and Scott delicately unpeeled and stacked his Dairylea Lunchables, four of us were on a mission to crunch some windy miles.  After four days in the saddle hills and fells had given way to moorland.  Instead of sheep we had grouse for company, clapping disgruntled from the heather, plentiful and protected; until hunting season. 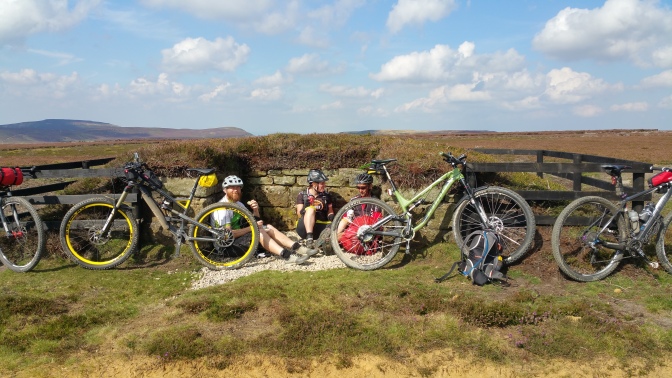 Walkers were a rare sight and mountain bikers rarer still.  But there’s one coming towards us, head down, spinning at a high cadence.  On a lime green frame, yellow thighs pumping and red torso bent, the rider is straight out of MBR magazine.  A nodded greeting and he’s gone, tyres sucking at the sodden earth.  And it’s not long before two more pedal past to be swallowed between the horizon and the sky.

Only two minutes later one of them is back.  “Are you guys doing the coast to coast?”  He stole a breath and let us nod before he told us he did the ride eight years ago.  Which route did we do?  Did we do Black Sail?  How were we finding it?  He was hungry for everything we had experienced.  And then –

The wind dropped.  The grouse fell from the sky, thumping to the heather like clothes tossed into a wash basket.  And Scott, Richard and Dave retreat.

A whole week before this ride I felt sick.  I had no energy.  I was not sleeping; instead I was mentally scanning my packing list or projecting myself into the hills and failing out there in spectacular ways.  I was the weak link.  The girl.

When we started pedalling and faced challenge after challenge – a scramble to the summit of Black Sail Pass, bikes balanced on our shoulders, or the grind up the 33% tarmac climb of Hard Knott Pass over 30 miles into the day – I realised, as always, I had been scared of not being good enough.  And at the same time I realised all I needed to do was keep going.  That, in my mind, was how I was doing.  Girl or otherwise.

I should be angry.  He is judging female bike riders across the globe.  But I suppose I judge him too; faded tattoos on his knotted legs, the skin on his face hardened and reddened by time-served.  He’s from another world and he is genuinely excited that a girl is riding the coast to coast off road.

And, I am used to a gender skew in mountain-biking.  I sort of accept it.  When I started riding I went along to an open day to see what my local biking club was all about.  Three men took me for a pedal amongst the twists of the pine forest and the guy with the tree-trunk thighs told me about these special rides; for ladies. I told him this was not what I wanted.  I’d take part in the normal rides.  Thank you.

Since then I’ve often been the only woman on rides of 10 or so blokes.  My girl-ness is rarely remarked upon but is not forgotten.  It’s in their renewed vigour if I tackle a technical feature they were going to avoid (rare-ish) or when I pedal up a hill beside them.  And then there are remarks –

“Don’t worry!  If we get lost we can eat the girl.” A sparkle in the eye, teeth bared in a grin (or a promise).  All eyes turn.  Did she hear that?  This particular rider seems to favour sections of track where he might die.  He is still with us and I don’t take his excitement about death seriously.  Therefore, I am not too worried about being eaten any time soon.

Let’s hope not because women occupy a small enough area of the mountain biking landscape as it is.  So says the numbers who enter races, the coverage in the major magazines, the range of kit available from mainstream manufacturers and the marketing of it.  I started writing this in front of Trek’s film, Unreal, featuring free riders creating a world away from the mundane.  They ride with wild horses and prove that humans (and bikes) can fly; fantasy.  There are no women in the film – not quite fantastic enough.

And sad.  The fact that I don’t ride with more women is sad, too. But I also consider myself lucky to be grinding against the wind with biking friends who test and support me.  And contrary to their expectations, I recognise the man-on-the-moor’s crooked compliment.  He’s passionate about biking and knows the route we are doing is tough.

And bar threats of being eaten, I find the gender imbalance in mountain biking exciting.  There are so many opportunities for women to ride, compete and innovate and there are a heck of lot out there leading the way!