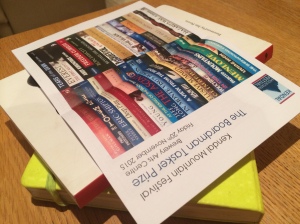 ‘That’s the thing about your sport,’ the whiskery man beside me said.  ‘Your stories will always lack something.  Your journey is less likely to come to a premature end.  It lacks the finality of death.’

We were an odd mix, these mountain climbers and me, the mountain biker.  I had never thought of what we do in terms of finality but as ale had lubricated tongues the conversation had turned towards ‘epic’ adventures.  It turned out to be something of an in-joke and my companions laughed as I slowly realised the fatal significance of ‘epic’.  A climb is not epic unless someone dies.  ‘Really?’  I could not believe a sport could be so brutal.  Several faces, skin hanging from ridged cheekbones, nodded.

We were gathered to see the Boardman Tasker Prize for Mountain Literature awarded.  Established in 1982, to commemorate climbers Peter Boardman and Joe Tasker, the prize goes to works the central theme of which is mountains.  I was excited when learned of the award; was there a library of literature that mountain biking had contributed to?  I imagined great mountain biking story tellers, musing and scribbling just minutes before ‘styling out’ a gnarly downhill.  But just one look at this year’s short-list made it clear that most works come from climbers (and that my imagining was an original work of biking fiction).

With Joe Simpson’s Touching the Void (a past winner) the only mountain book in my collection I purchased two of the short-listed books; Barry Blanchard’s The Calling: A Life Rocked by Mountains (his story of disadvantaged kid to internationally renowned  alpinist) and Dan Arnold’s Snow Blind: Stories Alpine Obsession (gothic-style short stories of the darker side of alpinism).  And then I braced myself for technical climbing jargon and worlds that I did not understand.  What I got was a cruel and compulsive theatre where human suffering and triumph are played out at the edge of existence.  While I will never climb a mountain, being able to understand the people who do is a terrifying journey; these are characters stripped bare to their startling centres.  And what finally grabbed me were the gods, ghosts and myths that haunted this world.  Because, hostile in so many ways, the peaks are fertile ground for the surreal.

And reinvigorated by this awesome world, I wondered again if mountain biking could contribute to it.  My feeling was that it should, but I had not found any other mountain biking books within the prize’s history.  A quick Google fetched up a link to biking literature on World Literature Today.  Some exciting titles, featuring ‘The Tour’, of course, racing in general, travel and discovery.  But no mountain literature.  Nothing in the spirit of mountain biking.

The spirit of climbing is as much about suffering as the peak itself.  The presenter of the award put to nominee, Barry Blanchard, ‘you can suffer.’  This was a big compliment.  Suffering was carved into nearly every page of Arnold’s and Blanchard’s books; nights spent shivering pinned to rock faces; days at high altitude without food and little fuel for the stove.  Avalanche, dehydration, exhaustion, vicious storms all suffered through while the climber depends upon an unfaltering mental strength.  Bikers suffer – there are hills, there are technical descents, there are long days in the saddle and there are falls – but they don’t suffer like that (not that I am aware of and if they do, they should write about it!).

By comparison, the biker’s story does not even start until they reach the top of the mountain.  The climb is the prologue.  Sure, the cross-country riders will light up on a lung-stretcher, but the flame would not be so bright if it was not for the promise over the summit.  And what is the descent for if not for watching, while marvelling at the movement of the body around the bike as it is jumped, lifted, hopped or tanked across spectacular and unforgiving terrain.  Then there is the extreme of international Downhill, Redbull Rampage and other visually stunning edits produced to promote this brand or that rider.  These guys can fly and they take huge calculated risks that, to watch, can ignite the soul and steal the breath.  So, understandably, they are best absorbed through the eyes to a mean soundtrack.

Perhaps the whiskery climber was right.  The threat that runs like a live-wire through mountain climbing, is absent from biking.  Sure, mountain-biking is dangerous; riders become severely injured and some have died but Death is not such an accepted companion.  And I would go one step further so say that the spirit that runs through the biking is altogether different, although I cannot quite define it in contrast to the suffering that defines the climber.

Blanchard’s book won.  The judge, a razor-tongued Scot, said it was because of its power and commitment.  Over 50 now with a silvery pony tail hanging down his powerful back, Blanchard accepted his award with grace – ‘I’m a crier,’ he admitted.  I was not close enough to see tears but I was fascinated by his eyes as they were caught in the stage lights.  What must they have seen terrified me; an alien and unknowable landscape, were it not for the power of his book. 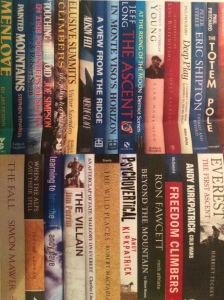 #stillhopeful. Because there is, without doubt, an abundance of power and commitment in mountain biking.  As a sport it seems to be gathering momentum all the time. And while the first-choice medium of representation seems to be the stylish edit I have not given up on somewhere, sometime there being space for some truly gripping tales sprung from rubber.