I left the bed made with crisp new sheets. I tried to remind myself of this, taking one last look at my bedroom before I dimmed the light and made my way downstairs.  As I left the front door, swishing inside stiff waterproof clothing, all I could think of was the wind and the rain and the woodland I would be spending this cold February night in.

This would be my first time and there was something about bivying I could not get my head around. At once there was the vulnerability, the utter lack of boundaries or security and the demand that I must cope no matter what.  As we headed out, bikes loaded with sleeping gear and warm clothes, tyres sputtering on the wet roads, I really did not think I could.  Cope, that is.  And I reminded myself; it is just for one night.

That was my mantra; when my hands froze, when the rain refused to relent, when the trails were slippery with mud or the tracks were hub-deep with water, when the packs on my handle bars sagged and began to rub on my front wheel. It is just for one night.

A familiar 15 mile route on wide-open trails became a new challenge and acquired new significance beneath the rain and the weight. Rolling into the woods and making our way through the mashed-up tracks brought elation, and warmer hands because of the trees or the effort I was having to put in to stay upright.

Alongside the mantra I tried to take one stage at a time. The journey there, finding camp, changing into dry clothes, finally getting to the sleep part, packing up, cycling home.  And typically, each stage came with its own anxieties.

We had pedalled past noises and lights at the boundaries of the woods and I had simply increased the pace, having regularly seen the skeletons of cars littering the outskirts, charred and ruined. Deeper in the woods were gated.  We would be ok there.  But we arrived to find the gate pulled open and now the lights were brighter and accompanied by the loud yawn of falling timber.

No walls. No doors.  No permission.  Instead of the ugly bogey-men and trolls that are apt to lurk in the woods after dark, I was much more scared of coming across on officious forest ranger.  Our loaded bikes and the late hour gave everything away.  Tired, cold and worried for my bed I pedalled faster.

But of course, most anxieties stay that way. Just aching thoughts that only serve to tire us out a little bit more.  And perhaps an hour later, snug in dry clothes and a down jacket, I was unrolling bivi bag, sleeping bag and liner beneath the damp log and earth lean-to and wiggling my treble socked feet deep down inside.  When all of us were in I was grateful to watch the steam from Dave’s flask of hot chocolate rising up and even more so for the swallow of warm sugar and the tiny fist of brandy that slipped down my throat with it. 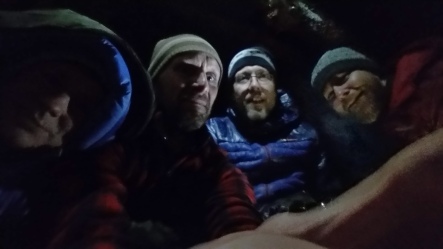 We slept until seven and it took time stuffing and organising in the grey dawn, all the while conscious of the urgency of leaving. The ride home had not been a concern, the weather forecast reading dry, but in reality it was hard.  We picked our way slowly along sticky single track and drove the bikes up sandy inclines.  My legs were awkward in waterproof trousers perhaps a half metre too long for them and out of the woods the wind delighted in turning anything that was still wet to ice; mainly my toes.

Through that night and the following morning I awaited the explosion of – wow! I did it! – but it never came. Not when I watched my breath frost in the air as I finally lay back to sleep, or on waking to the grey shading between the dank logs of the lean-to above me.

The experience was something else. Familiar woodland was fresh and abandoned and ours as we pedalled through it that morning and we could read our otherness reflected in the curiosity on faces of the walkers and bikers that we did meet.

But, mysteriously, it was the slog along the road home that stayed with me.  Traffic hammered by – cars old and new, cheap and outrageously expensive, all locked on the merry-go-round we call life.  So often I am part of that, rushing here, rushing there.  This journey was different.  My feet in the spongy Five Tens were numb and all I could think of was a warm bath and cup of coffee.  But no matter how cold my feet were, how awkward my legs or how crumpled my face, I was grateful not to be in one of those cars, moving swiftly and comfortably nowhere.  And when it finally came to it, those fresh sheets were delicious.  But no more so than the bivi and sleeping bag that I had tunnelled into the night before beneath drips and dirt and damp forest air. 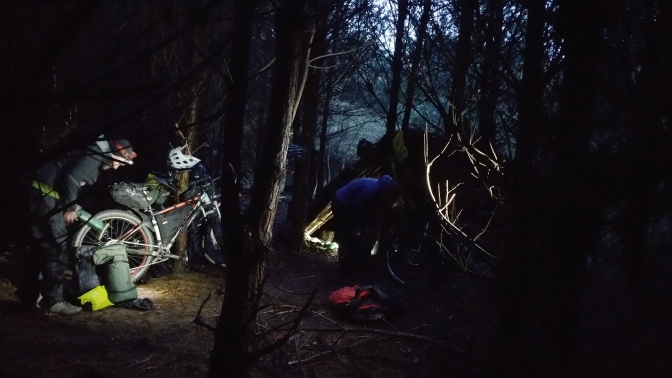