I awoke tangled in journeys.  The train to Hat Yai, cutting a line from Malaysia to Thailand through the dark.  Small paths winding into the Annapurnas in Nepal, taking me to that final trudge over the Thorong La Pass; sleep deprived and with an irrational suspicion of altitude sickness.  But it was the uncertainty I felt during those moments that haunted me, rather than the places themselves, as I woke to face a new journey.

Trying bike packing was always on the cards for 2016.  But they were cards to be drawn in much warmer weather.  However, when we decided we really could not afford that second skiing holiday tackling the Sandstone Way bike-packing style became our alternative.

The route, which opened in 2015, is described as a 120 mile geological journey.  It crosses much of Northumberland, and because it winds with the contours of an ancient sandstone ridge, it is a journey in no hurry to reach a destination.  But it does eventually, over hills, moors and through forests, taking in tiny villages and small towns; it begins in Berwick upon Tweed and terminates in Hexham.

While it offers freedom, bike-packing is a particular challenge to me.  I do not travel light; in fact, I find emotional comfort in hauling ‘stuff’.  But on this four day trip I must bear my burden utterly.  So, gluttony became parsimony.  Each item must be essential.  Liquids and creams were decanted, a small bar of hard shampoo was purchased, three items of makeup and a tiny perfume sample bottle made it into a small cosmetics bag. A notebook, a change of biking clothes and one for the evenings.  And with waterproofs, extra gloves, down jacket, woolly hat and lots of peanuts, I transformed my nimble XC racing bike into a stubborn packhorse.

Pedalling this new machine after alighting the train in Berwick on Tweed, the coastal air nipping us, I was reminded of the two things that draw me to travelling; vulnerability and freedom.  A familiar anxiety settled as we pedalled to the causeway and as Dave boiled water on his beer can stove we waited for the tarmac to rise from the sea to let us pass to Holy Island (our unofficial add-on to the Sandstone Way).

If there was ever a place to appease anxiety it is Holy Island.  We spent the night in an old tavern.  Then left our beds at 05:45 and pulled on gloves, goose down and a hat, to watch the sun rise.  With the ruined priory behind us and the harbour and still waters stretching out ahead, we waited.  It was easy to let fingers of cold feel inside my trouser legs and down the neck of my jacket but if I focused on the red horizon staining the gentle ripples in the water, and listened for the whispering of water against land, I forgot everything else.  As the sun grew bright above the sea I felt the restfulness that St Matthew promised.

By the time we reached Ingram House, nearly 12 hours and 38 miles later, I had little energy to smile at our hosts and contain my awe for their home.  But they tried to make it easy, stowing our bikes, waiting to lead us into the great hall, past portraits, up the grand stair case, to a room that was a riot of chintz, with the deepest cotton duvet on the bed that I have ever fallen into.

Split into the three real day rides (day 1 between Berwick and Holy Island being a largely flat jaunt), the Sandstone Way is a moderate challenge.  It is more so in muddy conditions, fully laden and after consuming Kinloch Mousse, Pheasant Roulade, chocolate terrine, plum crumble, steak, home made soup, porridge, American pancakes and a bottle or two of Cotes Du Rhone over the course of several days.  At each sitting I could not help but guzzle up the delicious food offered to us.  And each morning it became harder and harder to pedal if off.

If there is a day that will haunt me for journeys to come, it is the one between Ingram and West Woodburn.  There is the climb through trees to reach the moorland above Rothbury.  From the ancient standing stones we surveyed the small town before winding steeply down to it for coffee and cake that would sustain us for the five mile climb into Simonside Woods.

Since we crested the first hill out of Ingram we had been watching the wooded hillside grow.  ‘That’s where we’re going,’ Dave pointed, my eyes followed his finger with a sense of unease.  But, once inside the woods the climb is steady, if relentless, until you reach the top and can survey the valley.  ‘That’s where we have been,’ Dave pointed again, this time leaving a feeling of still satisfaction.

That night we rested at an old coaching inn, where we were served a huge meal while the host kindly washed our filthy clothes and slipped hot water bottles between our sheets.  We left warm and full the next morning, imagining we would munch up our final 28 miles by lunch time.  But it was 16:00 before we rolled up beside an inauspicious sticker on an electricity box in a Hexham suburb; the end.

A humble end to a day that had seen us pass Hadrian’s Wall and taken us up to the hills of Warden in the glorious sunshine.  But the Sandstone Way is not about beginnings and endings.  It is the landscape, the scars history has left upon it and the people to whom it is home.

I won’t say that bike-packing was a revelation.  I missed the light handling of my mountain bike and the way the carbon frame can skip over rough ground and levitate uphill.  But I made my own way and I carried everything I needed.  We drew up at that old coaching inn as travellers might have centuries ago, hungry, thirsty and in need of sleep, but in a different form of saddle.  Bike-packing the Sandstone Way allowed me to lay aside the weight of the detritus that clutters my everyday life, leaving me free carry just what I needed, to travel freely and get lost in (and splattered with) the landscape around me. 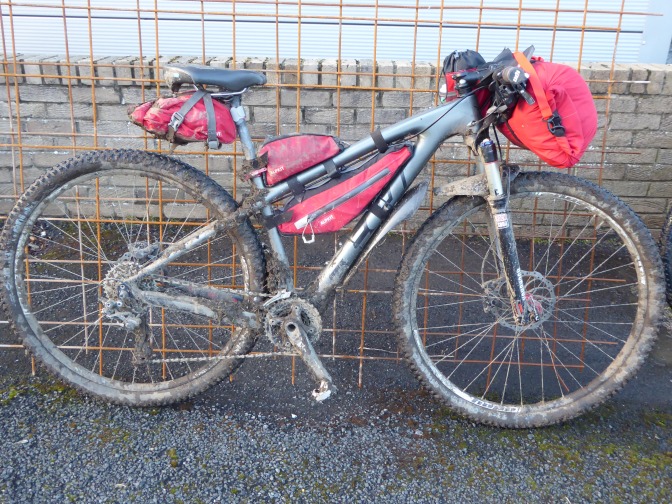 One thought on “Travelling Light Along the Sandstone Way”