Darryl’s face is pale; 60 years of wear hanging above a bowl of risotto he can’t touch.  Two empty glasses before him, translucent residue sliding down, pooling white in the bottom.  He pushes one towards me.

‘No! No more milk!’ The Italian hostess turns away, tossing her hair, before disappearing into the dinnertime fray of Rifugio Elisabetta.  At nearly 2200m elevation, on the Italian slope of the Italian-French border, it is packed to the rafters with walkers, all ravenous from a day spent stomping the Tour Du Mont Blanc trail (the TMB).  I look back at Darryl, wondering how to break the news.  Wondering if he needs something more serious than milk.  Behind him, through the smudged window pane the sun has winked its last across the Val Veny; bulging rock contours and the iridescent glass surface of Lac de Combal have retreated into muted grey. 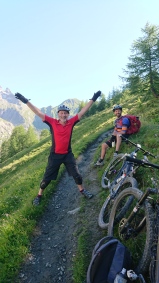 The day started with star jumps in Val Ferret, when the sun was still rising.  After a good night’s sleep, Darryl’s enthusiasm was literally leaping out of him as we paused to capture the scenery.  Over good coffee and flaky croissants we had studied our maps.  There were two options: take the true trail, up on the side of the valley, or take the road that winds the valley bottom directly into Courmayeur,  our halfway point for the day.  Mindful of the sun, cranked to blaze at 30 degrees in the early afternoon, we still decided this: if we don’t go, we won’t know.  So, shortly after breakfast, we started to climb.

When the valley sides were still in darkness we were pushing our bikes up a narrow trail made of dirt and rock, greeting sympathetic or encouraging walkers tramping in the opposite direction in the language of the TMB – ‘bonjour!’  Some made fists, some smiled widely to see our two wheeled contraptions a burden rather than a blessing on the steep upward gradient.  When the sun was washing the valley, refreshing, not intense yet, we were traversing meadows, Darryl howling his delight to the rock faces opposite.  The walkers stood aside now, sympathy replaced by awe.  And when the rays really began to burn we were skidding down from the Mont de la Saxe, negotiating rocky switchbacks within the swathe of trees that hugs the mountain.  The walkers were temporary chicanes as they starred on, frozen, perhaps a little afraid, while we did not dare take our eyes from the trail. 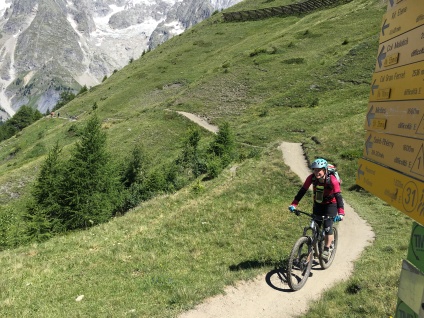 In Dolonnes, at the foot of Plan Chercoult, we looked over maps and GPS devices alongside salad, glistening with virgin oil and sloe-black olives.  Again we must decide; the track straight up past this little restaurant that climbs on and on through three ski lift stations, or, the road that the maps suggest will remove the 1100m climb altogether.  We blinked from the shade of our parasol into the white-hot afternoon.  ‘We can climb in four or five hours?  To Elisabetta?’ We ask the owner.  The cat, whose taut belly he has been scratching, jumps down from the table as he rises.  ‘My wife,’ he gestures to a lean tanned lady, ‘she can get up here in three hours,’ he looks us over, ‘you maybe do it in six.’

If it was an insult designed to deter us, it did not.  He said we could do it and if we don’t go, we won’t know.  Under the lashing heat we began to climb.  Trudging from one outstretched palm of shade to the next we made our pathetic assault on the mountain.  Part way up, as Darryl and I stand panting, he tells me, ‘my shoe’s broken.’  He picks his foot up like a pony and I can see the heel is missing, snapped clean off.  He’s walking on smooth plastic mould and there’s nothing he can do about it other than keep walking.

Courmayeur is perhaps 700 m below when we sit on the deck of a cafe/refuge, each of us lapping up Cornettos and sipping coke. With another 500 vertical metres ahead the sugar is not a concern.  Despite our fatigue, the shade of an umbrella and the cascading view afford a moment of peace.  A collie dog appears and rests her head in Dave’s lap, in empathy, I assume; one mad dog to another.

When we see the mountain, Mont Blanc, we study it, undecided.  It’s peak is hidden by a veil of fine cloud and it lurks behind lesser peaks.  But there is no disguising the austere face, the tongue of snow and ice that lolls down from it in what could be a hostile taunt.  Richard captures the mountain on his phone for later scrutiny and we step on, following a fine trail on an upward traverse of the green hillside with no end in sight.

When Darryl asks if anyone else is feeling dizzy, the sun has finally begun to abate.  Shortly after, he lays down on the remnants of snow and tries, in vain, to summon an angel.  No, none of us felt dizzy, but I think we all felt a twinge of worry.

It may have been 18:30 when we made the high point, beneath the scree slopes of Mont Fortin and Mont Favre, after a series of careful lifts and scrambles up an exposed, eroded path.  We are greeted with a cairn, perhaps six inches high; this I do take as an insult.  Darryl pulls on pads and descends as fast as he can.  Fueled by coke, we follow him down a looping track carved into the hillside.  The wind moves around us and the sunlight plays on our bikes – finally graceful in their element.  Bumping over boulders, crossing water, passing an old ruin, we let the path take us where it will, into the shadows and towards Elisabetta.

When we find the gravel road the Lac de Combal shimmers before us.  Beyond it, a sentinel on the hillside, we can see Elisabetta.  Only 200m of vertical ascent to go, not long now.

Amongst the international confusion of hikers inside the rifugio, Darryl tells me he will drink hot chocolate.  I tell the next hostess I can find, shrinking from her lean aquiline features, expecting a rebuff or worse.  She brings it, all the same.  And after that a coke.  And then another.  ‘I thought I was going to have to ask you to get someone,’ Darryl mumbles, beginning to look about him.  He takes a napkin, then another, and begins to fork potatoes, green beans, discs of an unidentifiable meat into each one.  ‘I can’t eat it now,’ by way of explanation, ‘ I’ll eat it later.’

And he does; shivering in the boot room at 02:00 am, driven from the dormitory by the snuffling and rattling of the other 28 occupants, all laid out like corpses (but sadly not as quiet) on the giant three tired bunk bed.

‘It tasted amazing,’ he confirmed the next morning, hands firmly on the coffee jug, taking cup after cup, cursing the snoring, the sleep deprivation and the smell of the boot room, but ready to face day four of our two-wheeled assault on the TMB.