One foot in front of the other, each time the water oozing over my shoes, sucking, as I lift one, then the other.   I am colder than I realise.  I have traveled a long way through the wilderness and there is no turning back.

We have been beside the river for a while now.  Earlier, it was just a fable.  The final obstacle.  Now, iron grey, it runs quickly, cutting a deep gorge, gobbling at the steadfast roots on the bank and frothing with torment as it rushes over the rocky bed.  We must cross this.

Up above, the sky is grey, all the same, but swirling, fluid water colour stirred this way and that, sometimes a dove shade, next akin to the granite of the hills.  Invariably, water is spewed from it, sometimes in gusts, sometimes as sheets, soaking us in preparation for the river crossing.

I follow Scott’s black silhouette along a path that often disappears into the soupy marsh.  And from somewhere dark, a childhood terror crawls.  Willy the Wisp has a pointed chin, a razor sharp nose that cuts from between his beady eyes, stopping just above a devilish grin; ‘now you are trapped in the marsh!’ he cackles at Jacko, the young hero of the story.  But it is my mother’s voice I hear, twisted and torn, to the horror of her five year old daughter.  Willy lured travelers into the marsh with the glow of his lantern and trapped them forever.  As I drag my feet, feeling the pull with every step, I imagine Jacko wading deeper and deeper to his doom.

‘Are you sure you want to carry on?’ Scott asked four hours earlier as we rolled away from the road, glad that the cover of the trees would take the brunt of the wind and the rain it was carrying. I asked myself if I had the energy.  Barely.  But this is what we were here to do, a voice inside nudged me.  I shrugged, yes.  He pedaled on ahead.  I did not hear him ask the others, but I assumed he must have.  I concerned myself only with the rhythm of the pedals and my breathing.

Soon, after travelling double-track into the estate, a carpet of heather and bracken spread out before us with just one path cut across it.  I watched the others becoming smaller against the tawny blanket of bracken.

We were heading for a causeway, Scott said; a passageway between two lochs.  He may have muttered about a way round should it be impassable but I did not notice this implied threat of flood.  So, over each curved summit I scanned for water.

The four of them were sat on a rock, sandwiches in hand, when I pulled up on one such summit.  They were staring at the ridge opposite.  High up, below a rocky outcrop, where the heather grows on almost vertical terrain, the deer were running.  Brown bodies jostling in a wave.  There were at least 20 sweeping the hillside.  I should have been astounded – momentarily I tried to imagine their world, where this barren place was home – but I was tired and consumed by my own hunger. Only before I could eat a thousand needles of rain were hurled in our faces.  We had to move.

It was some time before the lochs came into view below; two huge, dark pools in a bowl of rock and heather.  A white building stands on high ground on the opposite side.  Between the pools there was movement.  I followed Scott’s black finger – ‘look, two figures on the causeway.’  There was hope in his voice and I should have noticed it for what it revealed; doubt. Instead, my attention was caught by the scar running up the hillside, away from the water.  It was steep and it was our path out of there.

When we hit the beach the sand and stone churned beneath our wheels, mocking tired legs, pebbles chuckling under the bike tyres.  There was a pool to cross filled with still water like smoked glass.  The sandy bed was visible beneath the surface, but it was an illusion.  I rode into it and realised it was suspended in constant flux.  I couldn’t pedal and put a foot out.  The sand gobbled it and my leg up to my knee.  I struggled out to Scott, waiting on the bank, a smile below his black rimmed glasses.  ‘It’s deeper than you think,’ there was wonder in his voice.  ‘No,’ I said, ‘the sand, the sand began to swallow me.’  But he was looking over my head.

Once upon the causeway we could see that the water was close, lapping at it, dragged by the wind that still pulled needles of rain with it.  I pedalled over as if I was being offered an opportunity, noticing, but not understanding, that the last few metres had already disappeared.  My tyres splashed through.

I chewed on the word ‘attrition’ as I placed one foot in front of the other on the slow climb out of the bowl.  The down-tube of my bike pressed on my neck and I jumped upwards every so often to shift it.  The mountain was winning.  Looking out at the sheets of rain that shrouded the loch below, chilled and damp inside my shell of Goretex, I asked myself what I was doing in this Scottish wilderness?   Whose lantern was I following?  There was no answer, only Scott’s figure up ahead.

A waterfall spewed above us.  I had been watching it for a while; a dramatic spectacle, only it’s drama became horror as I realised it was part of our trail. The animal in me lurched, flapped, kicked.  I could not cross that.  The water was white and ferocious.  Hurled down, it struck the boulders and took to the air, creating a churning white trap. 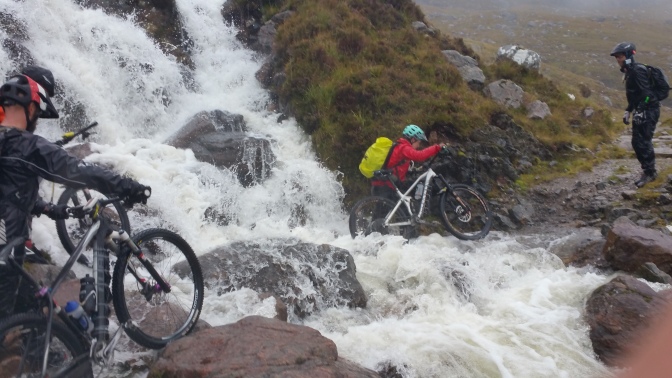 When I got there, Scott was on the other  side.  ‘Go behind the rocks,’ he said.  ‘I can come over for your bike.’  I shook my head.  If he got over, I could get over.  I lifted my bike above the white fury, wedged it against rocks that stood between me and the precipice, water exploding around me.  With my bike in place I made one step so that I could feel the life in the fall, the strong draw for the edge.  I shifted my bike, feeling just how much the tyres wanted to float, to go with the will of the water, over, all the way.  I made my next step.  Only when I was clear I could breathe.

There were other crossings, but none as powerful as that one.  I kept moving; on the bike, beside it or under it.   When we reached rolling heather and bracken again, there was hope; a golden chink of sunshine and the deer running beneath it.

And then the grey curtains were finally pulled for good.

From the true top we could finally see the river; far below, at the end of a long path of boulders.  To reach it we twisted through steep switchbacks, the rain finding our necks and our faces as we changed direction.  The wind delved into my ears, robbing my senses as I looked at nothing other than the trail.  I hung on and kicked with the pedals to make it through the boulders, always looking forwards to stay upright as the back wheel bucked and skittered.  I lost Scott until I was finally close to the river, sagging, exhausted, fingers weak on the brakes and then I tumbled as my front wheel caught between two drains.  As I flailed in the wet gully at the side of the trail, I watched Dave cart-wheeling away from his bike behind me.  He got up, pulled his bike up by the handle bars and I found Scott, following him into the gloom

Now, in the marshland beside the river I lose him from time to time, over a hump or behind a hillock.  He is chasing something I cannot see.  Only when the water comes he reappears.  The first tributary, a rocky, marshy wisp of river, was only up to our knees.  ‘I put my bike on my shoulders,’ he tells me, ‘just walk it through.  There are no big rocks.’  Water finds my calves and hauls on my legs and feet as I do as he says.

‘This one is a bit deeper,’ he calls from the next bank, ‘you are going to get wet.’  I fight with anger and resist the urge to snap about already being wet.   I have to cross, I have to keep going.   I pull off my backpack, then loop it around my neck, balancing it so that it does not choke me.  Then I shoulder my bike.  The water holds me up to my rib cage.  And it is marvellous, not cold as I feared.  I wade with slow purpose, reassured because I know the river crossing is close and it will be over soon.

I pedal slowly behind as we make our final splash through the marsh land.  Beneath our wheels is a Landrover track leading to the shore line; it is completely submerged but we see it now and again, indistinct beneath the swaying tufts of grass.

At the edge of the world white fingers of water tear at the shore line.  Scott and Dave’s silhouettes, faint behind a veil of rain, wade out into the yawning loch that is foaming and rearing towards the grey sky.  Here is the crossing, where the loch meets the river.  They are faint, but I can see they are waist deep, arms swinging wide above the swell.  They are getting bigger, they are coming back.

We must find another way to cross.  For an hour I watch, shivering, as Scott tussles with the raging waters of the river.  His struggle has no soundtrack from my position on the bank, torn away by the wind and the rain.  He is just a small black figure, trying to solve a problem much bigger than himself, bike above his head one moment, almost torn from his grasp the next.  He is doing battle with the river and something else that I cannot see.  I know he is losing.  Richard pedals out to talk him back to the shore.

My first taste of the West Highlands was as a seven year old, in the pristine stone house built by my uncle, sliding around on his battered Chesterfield before a huge stone hearth, above which hung the antlers of a stag.  The house was in Sheffield, but on the television a story was being told about an otter, the man who owned it, and their life on the west coast of the Scottish Highlands.  It was this book, Ring of Bright Water, I turned to after our aborted journey.  After we were rescued the next day from a small hut I wanted to hold onto the isolation in that place – the vulnerability and the fear.  ‘It is no will-o-the-wisp I have followed here,’ I read in one of the opening paragraphs of his book, describing the sense, the instinct, the potential folly, that drew him to that remote, and dangerous, place.  And  I remembered the childhood ghoul that came to me in the marsh.   What drew us, wet, tired and yet deeper into the unknown?  And what would call us back?