Dave and I took a trip to Revolution Bike Park a few weeks ago. He told a story about it later on Facebook:

A full on Revolution…the bike park that is [whatever that means]! A great day’s uplift which gives a great mix of trails, with lots of jumps drops and steep ‘n twisty tech…

My story was different…

I shifted in the passenger seat, watching the scorched bracken covered hills draw themselves up around us. Beside me, Dave pointed out the little snow caps on the tops, excited. I shivered as I thought of being cold, exposed.

‘We’re here,’ he announced as he pulled between a row of stone cottages and the village church, following the road up to a slate terrace where van after van appeared to be stacked. A shed presided over them and behind that, the hillside, carved at the bottom with deep curves.

While Dave wound the Caddy through parked vehicles looking for space I looked for the shapes of women. Rounded hips, the tassel of a plait telling a tale from beneath a full face helmet; shapes of reassurance and comfort. Instead, there were men in various levels of dress, some bent, hopping in thin boxer shorts from jeans trouser leg to the legs of downhill pants.

He found a space beside a Ford Focus. I grumbled we were too close. He argued, ‘no Jo, there’s loads of room.’ The reality was he could never have been far enough away, not while he was still in the car park or even still this side of the Welsh Border.

I signed us up for this and I had been dreading it. As it got closer a film reel started running behind my eyelids; broad shouldered men with beards, moustaches and tattoos capering about yelling that I should get the hell out of Revolution Bike Park. Who the hell did I think I was? I did not belong there.

I had not examined my reasons for being there. Not really. It was to improve, right? But if I really considered it, it was just to prove. Something. To someone.

I got out of the car, walked to the paperless portaloo, remembered how feral the place felt last time I was there; sodden, fighting to remove clothes that clung to me on this same floor, forgetting the squalor that would stop most women my age in their tracks, only grateful for this small shelter and that I had survived the day. I walked back to the car to find a guy peeing just in front of it and waited for him to zip up.

Many of my riding companions have been guys. But there is something about downhill guys. They’re faceless, formless inside helmets and body armour. I identify them by the branding on their clothes and helmets. And by the world-conquering ogre voices that thunder as they call to each other – ‘cased it! Smashed it! Sent it!’ In my mind, they are too close to the ice hockey players my five year old self learnt to be scared of. Each Saturday morning I took ice skating lessons. When the lesson ended the social skate started and so I hung out with friends, becoming more anxious as each one slipped away to parents waiting behind the barriers. I always looked but there was rarely anyone waiting for me. When they were all gone I wove between the families, friends, lovers on the ice. Invisible. Then, when the arena was almost empty and silence echoed, came the bite of a hockey blade in groomed ice. Then, cut after cut after cut, slicing away as thick legs and billowing shirts sped past me until I fled behind the barriers to wander the tunnels.

So, I’m here at Revolution and in my care is a terrified five year old and I’m going to take her down some big-assed bike trails. Beside me in the rear of the Landrover is Dave – mental age circa eight or nine. He’s chattering away about the engine, the revs it is making on the steep ascent, snapping the hills on his phone and then the bike frame at the top that is hung from a tree amongst all the other spoils. Trophies; those things the hill has chewed up and spat out.

A couple of hours in it’s chewing me up too. I’m letting it. I’ve become an animal backed into a corner – ‘ for fucking fuck’s sake!’ I erupt as Dave dabs down in front of me behind another rider who’s slipped on a root. I’m fierce but there is no need. I’m fighting a life-long battle and now I have another layer of shame to deal with on account of my irrational temper.

The day goes like that. Ferocity and fear. Me against the hill. Me against everyone else on it. On the inside at least. On the outside I’m just another rider. I get down 11 times. My skill is not that of many of the people on the hill that day but I do ok. Only I’m too consumed to see that. When the day is over, when Dave heads back up alone for ‘one last run’ and I know I’m safe, fear begins to fade. It becomes just an imitation of itself, a dull vibration, leaving only numbness.

During the drive home I am catatonic. Dave wades in – this is far more dangerous than riding Revolution. ‘Hey, you should be proud of yourself, you rode well.’ I can’t form words. Something inside me wants to be heard but how do you make over 30 years of fear make sense? How do you speak it when it is still humming inside you? You can’t. I can’t. Not even to myself. And mixed with it, now the urgency of survival has gone, regret is slowly sliding in.

I’ve read articles by people who talk of how cycling assuages their mental health struggles. It’s a release. An escape. I think this is true for me (I can list all those things it has given me but that is for another day). But something else is also true. Cycling strips away, it leaves behind what we really are, the walls, the boundaries, the pretence and sometimes that can be ugly or scary. On a bike I face the same fears I face everywhere else in life – and they are almost as old as I am – only it has a way of exaggerating them. What is normally a whisper becomes a scream and they have little to do with roots or drops or table tops. This is my story. 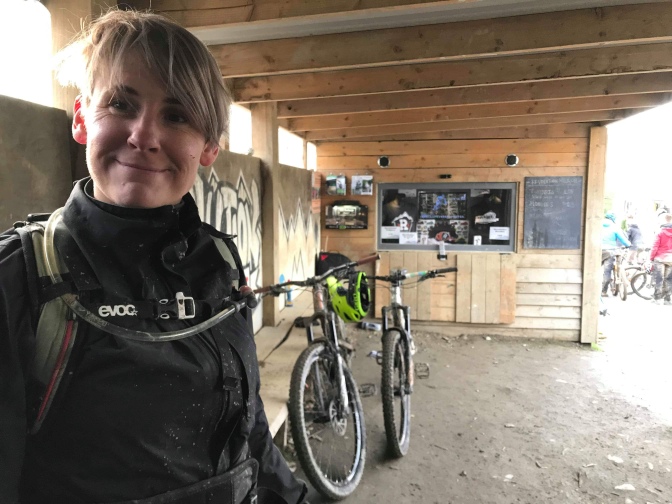